There has been a trend over the past few years towards text-based tooling, with the most popular examples including PlantUML, WebSequenceDiagrams and Mermaid. With these tools, the diagram source is provided as text using a special domain-specific language, which the tool then visualises, typically with an automatic layout algorithm.

These tools generally have a low barrier to entry, and the source text is easily version controlled. Also, it's relatively straightforward to automate the use of these tools in order to generate diagrams and documentation during your build process.

However, each diagram needs to be defined separately, typically in a separate text file. If you have the same element on two diagrams, and you want to change the name of that element, you need to make sure that you change the name everywhere it's used. The global search and replace features in most developer tooling does make this less of a problem, but it's just one way that a collection of diagrams can easily become inconsistent if not managed properly.

When you think about it, code is just text, and another type of domain-specific language. The open source Structurizr client libraries allow you to create your software architecture model, and associated documentation, via code. For example, using Structurizr for Java:

This program creates a model containing elements and relationships, creates a single view, adds some styling, and uploads it to the Structurizr cloud service via the JSON-based web API. Here's the resulting diagram when you open it in Structurizr, where the layout of the diagrams can be modified. 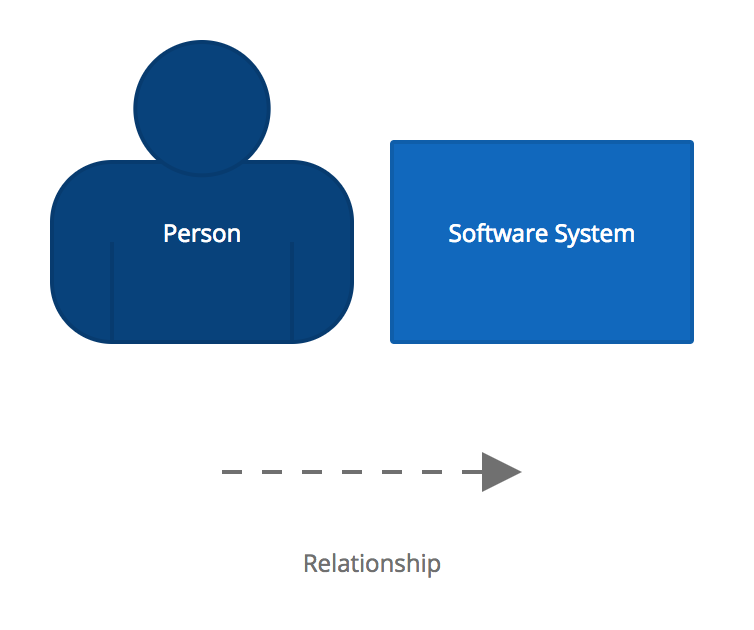 A diagram key is automatically generated for you, based upon the styles and shapes defined in the model.

Although using code to create simple diagrams might seem verbose when compared to static text-based approaches, the real power becomes evident when you start to think in terms of creating a model of your software system, rather than a disconnected collection of static diagrams. Rather than copying and pasting elements to reuse them across multiple diagrams, a model-based approach lets you reuse an element across multiple views (diagrams). The result is that diagrams stay in sync when you rename elements.

Also, using code provides a number of unique opportunities over using a static textual description. For example, rather than explicitly specifying which elements should be shown on a diagram, it's easy to do things like "create a system context diagram for a software system, where only the immediately related elements are added". For example, with Structurizr for Java:

With static text-based approaches (e.g. textual DSLs, JSON, YAML, etc), you likely need to manually create each and every element, relationship, and diagram. With code, you can programmatically manipulate the model and views using the power of your programming language.

Rather than argue over which diagramming tool you're going to use, why not use them all? A huge benefit of creating software architecture models as code is that you can visualise the views in that model using multiple output formats. For example, here are four versions of the same view (a C4 model container diagram), each created from the same code, and rendered in different diagramming tools.

You can also do the same with diagrams showing collaboration. Again, these were all generated from the same code, and rendered with different diagramming tools.


In summary, the benefits of using code to create software architecture models include:

Like any approach or tool, using code to create software architecture models is not a perfect solution, and there are a few trade-offs to be aware of:

Only you can decide whether the trade-offs are appropriate for your use cases.

The Structurizr client libraries include a number of classes that allow you create the elements that you need to describe your software architecture with the C4 model (people, software systems, containers and components), along with methods/functions to create relationships between elements. You can either create your software architecture models manually like the example above, or:

Some of these features are available out of the box with some of the client library implementations, others you will need to build yourself.

The following implementations support the core concepts of the C4 model, and are compatible with the web API used by the Structurizr cloud service and on-premises installation, via an intermediary JSON format. Some client library implementations also provide support for other diagram output formats. All are open source.


See the GitHub repos linked above for getting started guides and code examples.